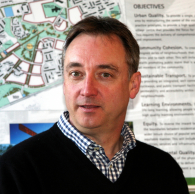 Graham’s interest in placemaking led him to London to study landscape architecture and urban design in a desire to spend a lifetime designing and improving places.  During his training and early years in practice, a number of mentors left Graham with a powerful insight on the value of a wide perspective when considering places.

Reading places is a skill he has mastered over the years, backed by broad vision and knowledge in detail. In 1991, he took on the role of Design Team Leader at the National Garden Festival Wales, a challenging task to transform Europe’s largest redundant steelworks into a new community asset.  Whilst consolidating his skills to deliver this complex project with a diverse range of stakeholders, it opened his eyes to the futility of iconic regeneration projects that failed to serve their target communities.

Returning to London, Graham focussed on the emerging urban design agenda, working in the leading practices of Tibbalds Monro, Urban Initiatives and Llewelyn-Davies on a range of high profile and cutting edge projects.  These included national policy documents such as By Design and the Urban Design Compendium, movement schemes including Kensington High Street and Ashford Ring Road, and pioneering work on town intensification programmes.  During this period in practice, his ethic for designing and changing places began to form:

“To change society, to change life means nothing if there is not production of an appropriate space... for new social relations there must be new space and vise versa....  As long as everydayness exists in abstract space, with its concrete constraints, as long as there are only technical improvements, as long as spaces (of work, leisure and residence) remain disjointed and rejoined only through political control, the project of ‘changing life’ will remain a slogan, at times abandoned, at times taken up again.”

In 1999, Graham joined the newly formed pilot Urban Regeneration Company, Liverpool Vision, as Director of Development, Planning and Design.  Over the following five years, he was responsible for the conception, development and implementation of the City Centre Strategic Regeneration Framework that successfully arrested the decline of Liverpool.  Again, a challenging role consolidating his thoughts on urban concepts and principles,strengthening his ethic for people focussed design.  In 2004, he established Maxim Urban Design, with a change in focus from cities to towns and residential quarters, acting primarily as a design advisor to the public sector, winning awards for his work in these communities.

In 2012, Graham returned to Liverpool looking for a new and challenging role and established the Prosocial Place Programme with Professor Rhiannon Corcoran (University of Liverpool) and Professor Tom Dickins (University of Middlesex).  This action research programme seeks to address the impacts of harsh environments in cities and to establish an evidence base to support the creation of benign city fabrics and the development of resilient communities.  In 2013 he transformed Maxim into the social enterprise Prosocial Place, and in 2015 was elected as a Visiting Senior Research Felllow in the Psychology Department of the University of Liverpool.

Graham has been an active member of several regional Design Review Panels, sitting on design review boards and acting as an enabler for community and public sector organisations.  He is also a Built Environment Expert with Design Council CABE, acting in an enabling capacity and is a trained member of their Active By Design Programme.

Graham works pro bono publico for a number of Liverpool organisations including: PLACED http://www.placed.org.uk/ acting as an Ambassador delivering built environment workshops to schools; the Lodge Lane Town Team, helping to deliver a new market square under the Portas initiative; is a Trustee of the Friends of Anfield http://friendsofanfield.com/; and a Board Member of Engage Liverpool CIC http://www.engageliverpool.com/.

Graham is an award winning designer, a frequent speaker at national and international conferences and writes for the technical and professional press in his field. 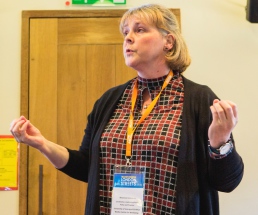 Rhiannon is a Professor of Psychology and Public Mental Health at the University of Liverpool’s Institute of Psychology, Health and Society

Previous roles include the academic directorship of Liverpool’s Heseltine Institute for Public Policy & Practice; director of postgraduate studies in Community Health Sciences, University of Nottingham; and director of Undergraduate Matters in the Department of Psychological Sciences, University of Manchester.  She is a highly cited and internationally respected applied psychologist with a diverse skill set and a broad knowledge of research, practice and policy in the field of mental health.

Rhiannon’s understanding of culture and community is built on a foundation of over 30 years exploring prosociality in the context of mental health and wellbeing. Both culture and community are possible only when minds meet, allowing shared intentions, aims and objectives to be realised.  Combined with a belief that the most important determinants of wellbeing and distress are societal and environmental and so, preventable, Rhiannon’s practical interest is in the making of places that facilitate community, a sense of we-ness and belonging.  Forming communities to enable us to exist alongside others of like-minds is a fundamental human right deriving from deep evolutionary roots. The common ground of place is what makes this possible.

As a leading academic linking evidence, practice and policy, Rhiannon directs the Improving Mental Health theme of the NIHR’s North West Coast Collaborative Leadership in Applied Health Research and Care  (CLAHRC-NWC) programme  http://www.clahrc-nwc.nihr.ac.uk/index.php.  She is also the lead academic on the Community Wellbeing evidence programme of the UK’s What Works Centre for Wellbeing https://www.whatworkswellbeing.org.

In exploring place as an enabler of community, wellbeing and culture, Rhiannon uses the diverse methods of social science and neuroscience to measure and understand the connection between people and place, our implicit responses and place preferences.  In her work with Graham on the Prosocial Place Programme, she ensures that this understanding is used to inform place design for the common good.

As an advocate of interdisciplinary research, Rhiannon is a core member of the Centre for Reading Literature and Society https://www.liverpool.ac.uk/psychology-health-and-society/research/reading-literature-and-society/about/ where her research into community and mental health extends to the positive role that literature and collaboration play in boosting wellbeing, forming friendships and catalysing prospects.

Web site under construction, but plenty to review about our work and something new each day...

Just completed a Community Insights assignment for a NHS Healthy New Town in Merseyside - see the report in our Project Gallery Enabling section.